Amruta Khanvilkar pens a note for Madhuri Dixit; shakes a leg with the judge at the shoot of Jhalak Dikhhla Jaa 10 : Bollywood News

Dance reality show Jhalak Dikhhla Jaa will return with its season 10 this year. The upcoming season is currently in its promotional phase and the makers are now introducing the contestants and judges of Jhalak Dikhhla Jaa 10 to the audience. Amruta Khanvilkar, who will be one of the contestants on the show, has shared her experience of shooting with the judge and dancing diva Madhuri Dixit, for the introductory promo. 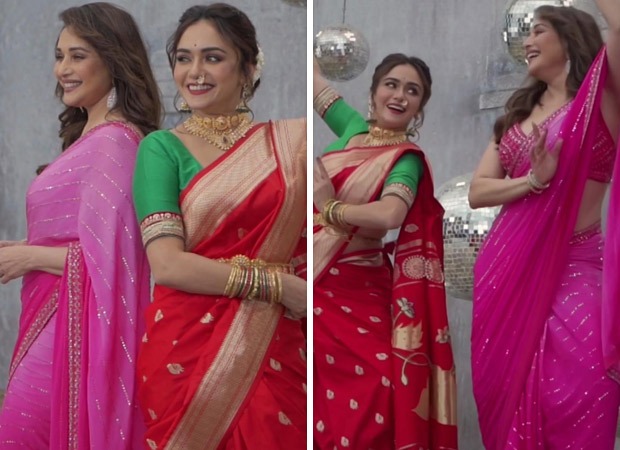 Amruta Khanvilkar pens a note for Madhuri Dixit; shakes a leg with the judge at the shoot of Jhalak Dikhhla Jaa 10

Recently, actress Amruta Khanvilkar shared a behind-the-scenes video while she was shooting the promo sequence for the show along with Madhuri Dixit. In the video, we see Amruta saying that she is ready to share the dance floor with Bollywood’s ‘Dhak Dhak’ girl Madhuri. Amruta is wearing a Navvari (Maharashtrian saree) while Madhuri is wearing a light pink saree. We also get a glimpse of how they are rehearsing for the promo.

Amruta penned a long moment recalling the special moment with the legendary actress as it was special for her to share the stage with her. Amruta wrote, “This day … these moments were so surreal for me … to be around someone I have always looked up to and to dance with the goddess of grace … it just seemed that my life has come back to a circle …. From that little girl in pune who used to dance in Ganesh Utsav on #madhuridixitsongs to performing with the legend @madhuridixitnene herself …. My journey in dance couldn’t get better than this …. With all the love that I have and I still am receiving for @thechandramukhi I want to promise you all one thing that I will always give my best when it comes to entertaining my audiences …. I m filled with gratitude and nothing else.”

Amruta Khanvilkar recently confirmed herself as the contestant of Jhalak Dikhhla Jaa 10. The actress is known for her performances in the Marathi and Hindi industry. Besides her, the show will also feature other prominent names like Nia Sharma, Paras Kalnawat, Rubina Dilaik, Shilpa Shinde, among others. In the judging panel, Madhuri Dixit will be joined by Karan Johar and Nora Fatehi. The show will kick off on September 3, on Colors channel at 8pm.