While theatres are currently making news for the lack of business created in case of films like Laal Singh Chaddha and Raksha Bandhan, Alia Bhatt starrer Darlings which was a direct OTT release has got the audience talking. The Netflix dark comedy seems to have garnered quite a bit of attention and the recent update is that it has been watched for 10M+ hours on its opening weekend, only on Netflix. In fact, Darlings has the highest global opening ever for a non-English original Indian film with more than 10 million viewing hours. 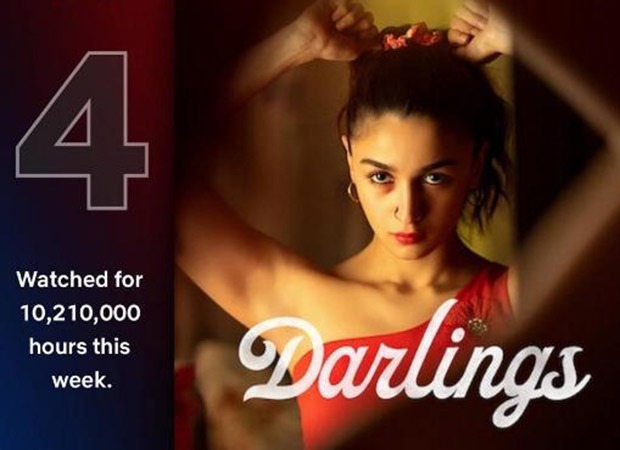 Talking about the love that Darlings has received on Netflix, Alia Bhatt shared, “Darlings has always been a unique and special film for me, and as soon as I read the script, I knew I wanted to be involved—not just as an actor, but also in a bigger way—in bringing these different stories to the audience and I’m glad Netflix is where it lives. I am overjoyed by the overwhelmingly good response to my debut production and I can’t wait to watch the marvels this movie will continue to perform. It’s incredible to see that the film has a global audience with Netflix and with it trending in the top 10 in 16 countries across the globe just in the opening week is incredible!”

Director Jasmeet K Reen shared, “Seeing our labour of love, Darlings being received so well by audiences across the world, is truly heart-warming. As a filmmaker, it’s great to see that Darlings has a platform to be watched and loved by viewers around the world with the click of a button and to be trending globally on Netflix just in the opening week feels surreal! It’s truly a wonderful and fulfilling feeling to see this story resonate with viewers globally and I can’t wait to see how more people receive it in the coming days!”

Producer and COO, Red Chillies Entertainment, Gaurav Verma commented, “We are overwhelmed with the response to the film, we hope the audience will continue to shower the film with their love. The film is the top choice of viewers and is really encouraging, and not just in India but in many other countries across the globe.”

Monika Shergill, VP-Content, Netflix India added, “We are thrilled with the immense love and appreciation for our film, Darlings in India and around the world. The film combines powerful performances by Alia Bhatt, Shefali Shah and Vijay Verma along with a riveting screenplay, raising the bar for entertaining and thought provoking cinema in India. Told in Jasmeet K. Reen’s unique voice and with a trusted partner in Red Chillies Entertainment, Darlings is winning hearts everywhere.”