Pardes completed 25 years on August 8. The film starred Shah Rukh Khan, Mahima Chaudhry and Apurva Agnihotri –actors who played their characters flawlessly and are remembered even today. Therefore, it will be surprising to know that Madhuri Dixit was interested to play the role of Kusum while Salman Khan was considered by director Subhash Ghai’s team for the character of Rajiv. Subhash Ghai recently in a video revealed why he didn’t take these two superstars and instead decided to cast debutants Mahima Chaudhry and Apurva Agnihotri.

25 Years Of Pardes: Subhash Ghai reveals that Madhuri Dixit was the first choice for the role played by Mahima Chaudhry; Salman Khan expressed the desire to play Apurva Agnihotri’s role

In the video, Subhash Ghai first talked about Shah Rukh Khan’s character. He said, “I had told him that you are not going to play Shah Rukh Khan in this film. His film, Dilwale Dulhania Le Jayenge (1995), had just been released and was a hit. His romantic image had a lot of fans.” He continued, “I also instructed him that in not a single close-up shot, we should have that expression from you which will convey that tum ladki ko pyaar karte ho. Agar woh expression aaya, toh meri kahaani barbaad ho jaayegi. Uss ne bahut mehnat ki (to pull it off).”

Subhash Ghai further said, “I told him that even the choice of clothes is going to be different. His character Arjun wears a shirt, suspender and instead of jeans, he wears trousers. Shah Rukh ko iss baat ki bahut takleef thi ki mujhe trouser kyun pehna rahe hai aap! But my idea in doing so was to convey ki uska character young hone ke bawjood kaafi mature hai. Also, it shows that he’s not that modern. He liked the idea and went for it.”

Subhash Ghai then revealed, “I had narrated the script to Madhuri. She was already an established star by then. She had loved the story (and was ready to come on board). But when I fleshed out the character of Kusum, I had second thoughts. Yeh woh ladki hai jo gaav mein hawai jahaz ko dekh ke sochti hai ki mujhe America jaana hai. Her friends have also got married in the USA and hence, she wants to do the same. She is a child-like person and is surrounded by her siblings, who are still kids. When her marriage is fixed, she’s excited, not realizing what she’s getting into. To get that innocence through a star was not possible according to me. With a newcomer, it would have been easy as the debutant actor would come without any baggage or expectation.” 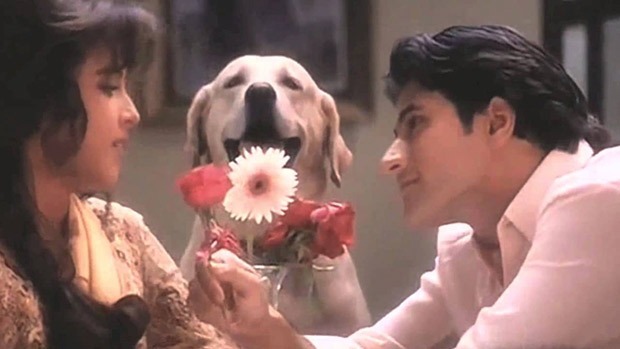 As to how Mahima Chaudhry got locked, he said, “When I met Mahima and interviewed her, I loved how she’d laugh loudly. She would express emotions with her beautiful eyes. Also, she was short-heighted. All these three factors suited Kusum.”

Subhash Ghai’s team however advised him to take saleable names. The showman said, “Many in my office told me that I should get big stars. It happens often nowadays. Aaj kal projects bante hai. But I believe that if we take the correct actors as per the character, the film will work and emerge as a hit.”

He then narrated how Salman Khan almost made it to the film, “Salman expressed his desire to work with me. My team found out about it. They told me, ‘Agar Shah Rukh Khan, Salman Khan aur Madhuri Dixit saath mein honge, toh sochiye Pardes kitni badi star cast film ban jaayegi’. They also said, ‘Hum Aapke Hain Koun (1994) ke baad itni badi hit yehi ho sakti hai’. I declined the idea as I realized that for this character, we need a new guy, that too someone who talks like an American and who is stylish. When I met Apurva Agnihotri, I realized that he is perfect for the role of Rajiv.”

Getting these actors was not easy for the reputed filmmaker. He stated, “I fought with my management. I told them, ‘Chahe iss film ki aadhi price hi kyun na mile, hum issi actors ke saath banayenge’. Today Pardes has proved that when you cast actors according to the character requirement and not due to star value, that film ends up being a classic.”

Also Read: 25 Years Of Pardes EXCLUSIVE: “I kept telling Shah Rukh Khan in every scene and song that he has to avoid his compelling image of a romantic hero” – Subhash Ghai